Talkin’ bout Birfdays,,,   Sarahs was earlier this week, and I slipped noting it.   May wanna go over there, she does the Hobbit thing and gives gifts on her birfday.

Big Country is doing Turkey day and Birfday, all in one.  Me thinks there is gonna be some gastrointestinal fortitude forthcoming, or gastrointestinal suicide,  dunno,,,,   May wanna go wish him “luck, wisdom, and condolences to that colon” in advance.

And Sarahs post on beartraps and thankfulness has me thinking too.
I have never lived in other countries, but have been in several at one time or another.  But I was always something of the oddball while in the Corps: I liked going out into the less traveled, not touristy spots.    Was lucky as hell that I didn’t get tripped up by the locals, but usually I found the locals to be very accomadating as I was trying to use the local language as best as I could, IF I could, but didn’t insist on “English or DIE M!F!”   Got to taste some local dishes, drinks and passed on more than a few as well (fermented Duckling, still in the egg,,,   umm. PASS (spew!!!!!)). Saw one Sharia Court in session while in U.A.E.  and did see that they DO still remove the ‘offending hand’ from thieves.   This one was open air, but quite formal, unlike the ‘broadcast courts’ I saw of the Taliban, after Slo-Jo and MileyVanilli pulled our asses out of that shit hole with our tails between our hind quarters.

But those things only reinforced my views on US.

We Are Not The World.  We are AmeriCANS.  Bill Murrays “Dogs Speech” in Stripes nails Americans spirit quite well.

We are the Wile E. Coyote of the world cartoon network, and the roadrunner is our “pursuit of happiness”.  We keep getting back up, pulling out the ACME catalog and trying something different, and to hell with world opinion. 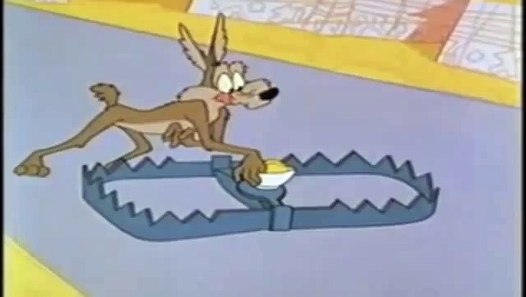 No Flippin’ Kings for us, and to hell with takin’ orders from asshats,,,   (and one of the biggest problems in Bootcamp I had (prolly EVERYONE had) was learning to take orders,,,  That shit ate me alive until I ‘figured it out’.   long story there, but for later.). We may fuck it up now and again, sometimes more, sometimes less, but we still get back up, and keep slugging it out with life, insisting on doing it OUR WAY.

I love Sarahs take on AmeriCANS attitudes about guns though.   That one tickled me.  Yeah, we do enjoy our Boomsticks, even give them endearing names, just like I name my boats.   Maybe they are ‘our kids’ in a sense, and yes, I have been in a room where you could discuss the wild world of reloading, along with the detailed explanation of why this powder over that one, which bullet had better ballistics and which would keyhole if you loaded it ‘correctly’ (that one was funny, they started loading the bullet in backwards and the thing improved in accuracy,,, Don’t ask me, I am just a dumb welder/reitred soundguy.).  Many other types of conversations along booms and bangs and those won’t ever be written about, only discussed in meatspace with well known an vetted people.  Too easy to get entrapped by some stoolys these days.

And tomorrow is the day we give THANKS.    I don’t know of any other country that has such a holiday as this one.  Not saying there aren’t any, but I am unaware of them.   Some people don’t “Get” the holiday, they think its just another gathering to stuff our gluttonous bellies, drink too much and watch Sportsball.   They don’t understand the Giving thanks thing.

BUT, even this old agnostic says the prayers, with feeling, on this particular holiday.   I may not pray to a/the/some God, but I do feel there are powers higher than us that DO have some influence on this world and in many ways, US,,,,

And have had some proofs of that in my time (Voodoo, an RV out of the blue, a certain orange and white kayak sitting on my porch right now.).  and have even felt the ‘spirit’ touch me when I needed it most (Saudi Arabia. Eljuafra forest, tingle in my spine told me our convoy was about to get jumped: and we did, 10 minutes later.)

I won’t go all theologist or anything here, my opinions and beliefs are my own, rather complicated, and not all that out of line with some ‘organized’ religions, but definitely NOT acceptable to them.  Think a little catholicism, paganism, quantum physics and Buddhist ancestral malarky, toss it in a blender with a 5th of everclear, and you might get close,

or your head may explode.  You have been warned,,,,

So, tonight, I am pulling all stops out and writing up a THANKS post, that will be delayed published tomorrow.   I have lots to give thanks for this year, and I intend on letting Universe know, that I know it and appreciate it.   So, look for that tomorrow, or Friday, especially since I would highly recommend NOT getting on the nets tomorrow, just cuz,,,   We ALL need a break, and how best to take one than by spending it with people, eating good food and thinking about what we REALLY have, and why we should be thankful for such.

This entry was posted on November 23, 2022 by diogenesoftherifle. It was filed under Uncategorized .